As a “home away from home” for families of seriously ill or injured children, the Ronald McDonald House in Milwaukee, Wisconsin, has been offering temporary residence to families with hospitalized children since 1984. With 38 residential rooms, the facility is always at full occupancy. In 2012 alone, more than 1,000 families benefitted from the facility.

Residential units at the facility had SAFLOK locks, which are common to the hotel industry. Guests were provided a magnetic strip keycard to access their private room. However, the keycards were increasingly unreliable. “The keycards were constantly being demagnetized,” explains Jessica Greb, director of house operations. She says this high failure rate at the lock was an unnecessary inconvenience for families who are already under a lot of stress.

Additionally, the SAFLOK system was limited to simple security—locking and unlocking—and unable to meet the facility’s demands of enhanced functionality like access management, audit trail reporting and wholefacility lockdown. Greb says there was a need to easily and efficiently monitor room usage to ensure guests accessed their rooms at least once within a 24-hour period because if rooms aren’t used, they are opened up to the facility’s long waiting list.

She contracted integrator Steven Beaudry with Technology Resource Advisors to update the facility with a completely networked access control system—one that included electronic locks that would integrate with software to provide the functionality the facility demanded as it grew.

With more than 1,000 families staying at the Ronald McDonald House each year—and constant turnover of rooms—Greb wanted to create a more secure environment with reliability, access control and integrated functionality. While she and her team didn’t start the project with a wireless solution in mind, it quickly became obvious that this was the most economical solution—both in terms of immediate and long-term costs.

Technology Resource Advisors developed a wireless online platform for Ronald McDonald House by integrating electronic door hardware from Allegion with software from Open Options. Being a retrofit, the old locks had to be removed. Not only was this a timely process, but the removal left holes in the door, requiring an extra backplate above the lock to disguise the previous door prep.

• With a wireless range up to 200+ feet, the system has a broad reach.

• The lock’s modular design allows it to be accessed using multiple credentials, depending on the opening’s requirements. For example, the type of credential used on residential doors could differ from credentials for utility or common area doors.

• The wireless locks trimmed the installation expense, costing an estimated 75 percent less than a hardwired solution. Setting up each door with a wireless solution was also a lot less time-consuming than having to hardwire each individual opening. Beaudry says this allowed his team to decrease the installation time to about 30-45 minutes per lock and ensured a zero margin for error.

• The most important feature of the AD-400 is its open architecture design, which allows it to easily integrate with a variety of access control systems. This has provided Greb and her team with daily emailed reporting that shows door activity and a trace history of every lock and cardholder.

“It’s been a 100 percent improvement,” says Greb. “Our guests are no longer inconvenienced, and we haven’t had to reset a single lock. The new system is much more conducive and functional for both our staff and guests.”

The integration of Open Options and the AD-400 gave Ronald McDonald House a user-friendly, dependable system. In fact, Ronald McDonald House has been so pleased with the wireless solution that it adopted the same solution for its new wing, which will be complete during the summer of 2014. The brand-new wing— which will add 32 more rooms—will include AD-400 locks as well as a handful of aptiQTM MT15 Multi-Technology Single-Gang Readers for mechanical and other rooms. The readers will utilize MIFARE smart credentials, which are known for their high level of security, speed and data storage.

Ronald McDonald House benefited from the strong partnership between Allegion and Open Options. With Technology Resource Advisors working closely with both product providers, they were able create a seamless solution that delivers the safe, secure and efficient environment that Ronald McDonald House desired. 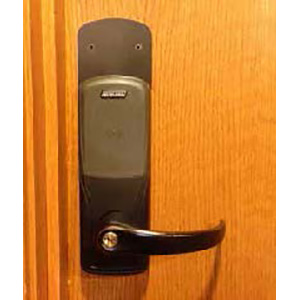